We Are The Helpers

It was rainy and colder than normal today for August in New Jersey. The boys and I piled in the car and headed to the grocery store with a very specific list. They helped me get the items and fill the cart. When we got home they helped me unpack all the items and line them up in the kitchen. My boys are helpful when asked, but today they did everything without being told to do it. Today I could see a change in their motivation.

While we were away on vacation last week I received a group email asking for help for a family we know. The mom underwent unexpected, emergency surgery and the email was asking for volunteers to provide dinner for their family during her recovery. I chose today. I bought all the ingredients to make chicken pot pie and I explained to the boys why we were going to the store, and why I was cooking in the middle of the day. They were eager to help. I remember people doing the same for me seven years ago when my husband underwent emergency open heart surgery. Our oldest son was only 18 months and everything is such a blur, but the one thing I can’t forget is the help. I remember the meals that were delivered and the people who offered to take my son to the park. It was a hard time, but I mostly just remember the helpers.

The devastation in Texas right now is vast and hard to even comprehend from far distances. Friends of one of my closest friends went through an awful ordeal that echoes many others. They were stranded on their roof with no help in sight and as each minute turned to an hour and each hour turned to hours the situation seemed to be hopeless. 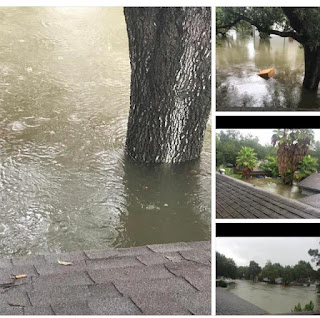 Only it wasn’t hopeless because my friend decided that instead of doing nothing from states away she was going to step up and be a helper. Nikki and her husband Brian took to social media doing everything they could to get as many people involved in hopes of getting their friends, Kris, Mary, Matt and their pups rescued from the rising flood waters. People from all over began calling the police, and fire departments as well as the Red Cross. They were able to provide help with the necessary GPS coordinates because all street signs were of no use. After hours of not knowing if they were going to make it, they were rescued via helicopter. According to Mary, “We saw helicopters. We saw boats. We wondered. Our anxiety grew. When will ours come? It will get dark soon. 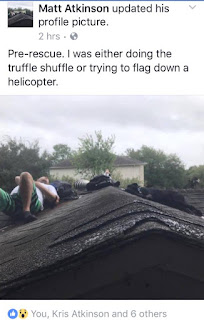 Then at 3:56 the text came from Nikki saying, “rescue is coming they are 2 miles away.” They lost everything, but they have been nothing but positive and grateful for their lives and the help of others. I have never met Mary, Kris or Matt but it doesn't matter. My good friend asked for help for people she loved and without hesitation I jumped and I was not alone, not by a long shot.

You may be asking yourself why I am sharing these two stories with you. It’s simple. We are still good. We are still in this thing we call life together. Everything has felt like a big old mess recently, but in the end we are human. We still love. We still want to help. Sure helping makes you feel good and that’s fine. I told my boys today that helping others is rewarding and it’s meant to be that way. When we feel needed we feel useful and that in and of itself is rewarding. When things feel messy, clean them up. When people need, provide. When you are in need reach out and ask for help. When it feels like everything is falling down around us, pick up the pieces and start to rebuild.

You see in the end it doesn’t matter who you voted for, or if we are the same religion, or if we route for the Yankees or the Red Sox. It doesn’t matter if our parents are first generation Americans or if our relatives were here since the Founding Fathers. It doesn’t matter if you like the Beatles or the Rolling Stones. It doesn’t matter if you prefer the city or the country or if you’re a night person or a morning person, none of it matters. In the end all that matters is our ability to be human. All that matters is our ability to step up to help our fellow human in a time of need. We all have more in common than we realize and it shines through during times like this. We are all mothers, fathers, sisters, brothers, cousins, friends, daughters and sons. We all have the fight in us to try to safely land on our feet during times of distress and we all have the instinct to step up and help when we are on the other side of the disaster. I have been watching the coverage in Texas and I will say that our ability to come together in a time of need is still strong. We are not as much of a country divided as we thought we were in the past couple of weeks. We are stepping up. We are not just looking for the helpers. We are the helpers. 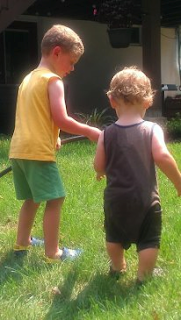 Here are some links for places to help as well as uplifting stories about those who are stepping up and helping.

Kris, Mary and Matt's story
These amazing helpers
This furniture store owner
These pictures of people coming together

The Red Cross answers how to give help and how to get help
How You Can Help
Donate to help Mary, Kris and Matt
Remember hero SGT Steve Perez
Posted by Jennifer Lizza at 11:19 PM 4 comments: