A Book Review and GIVEAWAY: This is Why We Can't Have Nice Things by Clint Edwards 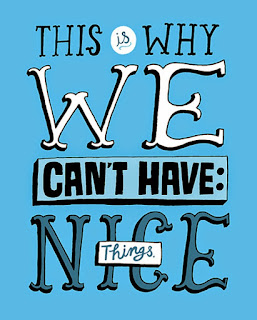 There are a lot of awesome things about blogging but one of my favorite things is the people I have gotten to know along the way. Clint Edwards of No Idea What I’m Doing: A Daddy Blog happens to be one of those people. I started to get to know Clint through our blogs about a year ago. We have both had guest posts up on one another’s blogs. (See his here) We have shared our funny stuff on Facebook and supported each other on Twitter. It’s what we refer to in the blogging industry as being a supportive blogger.

When Clint contacted me to tell me his first book was being released I was so excited for him. He then asked if I would be willing to give it a read and an honest review. In fact he said, “Seriously even if you hate it. I want you to be honest.” Of course I said yes.  When I downloaded my copy of This Is Why We Can’t Have Nice Things, I immediately thought, huh we can’t have nice things either. Then I opened the book and started to read.
I found myself laughing and shaking my head in agreement so much throughout this book that my neck hurt by the end. As far as I’m concerned neck pain was a small price to pay for all the laughter. Clint takes us into his home. There were times I felt like I was sitting at the kitchen table with him and his wife Mel. It’s a raw and honest look at marriage with a side of kids. Clint took over for his wife and becomes a stay at home dad early on in the book and boy did I love it. All I kept thinking was SEE it’s not as easy as men think it is. His daughter is in a stage of only wanting to be a dog and I laughed and laughed thinking how much toddlers can really kick your ass.

I have always said that Parenthood is not for the weak. There are times that I wonder if I’m strong enough to survive it. This book proves that we are all in the same boat. Even the chapter titles (Stop Eating Your Boogers and Be a Gentleman) had me nodding my head thinking, yup this is going to ring true for me as well I can feel it already. Perhaps my favorite chapter though was Unwanted Parenting Advice and How I’d Like To Respond. Obviously.

4. Even with kids keeping a house clean isn’t that hard. The secret is to deep clean it once and just maintain it.
When you say maintain it, you mean put the kids outside with a water dish and bowl of food until they’re 18, right?

Email ThisBlogThis!Share to TwitterShare to FacebookShare to Pinterest
Labels: Book Review, Clint Edwards, Marriage, Outsmarted Mommy, Raising Kids, This is why we can't have nice things

Parents tend to have a lot of different opinions on what qualifies as the best way to raise our children. We may not all see eye to eye on the foods we feed our kids, the schools we attend or the sports they should or should not play, but I  think it’s safe to say that we all have one thing that we can agree on. We all want to raise kind children.  No one walks around arguing that they are really hoping to raise a giant jerk.  No one wants their child to grow up to be an adult who isn’t kind. Knowing what we want as parents and ensuring that we are doing it though are two different things.

On any given day when we turn on the news or scroll through Facebook we are inundated with people behaving in ways that are anything but kind. We have become so used to this behavior that when someone does do something kind we share it and talk about it as if we just saw a real live unicorn. When did kindness become so shocking? Don’t get me wrong I love a good story about kindness but part of me just wishes these stories didn’t surprise us.
Raising children is no easy task, especially if you want to raise those children to be good people. We are raising two boys and I am often told how lucky I am to have boys. I can’t tell you how many times I have heard boys are so much easier to raise than girls. Really. Are they? I don’t think they are. I don’t think raising children in a world where kindness is not the norm is easy for anyone whether you have a gaggle of girls or an army of boys. We are doing the best we can to teach our boys right from wrong. We talk to them about leading instead of following. We talk to them about treating people the way they themselves want to be treated. We talk and we talk and we talk.  We hope that they hear us but it’s not always easy to tell if they are really listening.

The other day we were in New York City for the day. We live in New Jersey so my boys love taking in the sights of New York whenever we get the chance to go. New York is known for its busy streets. At any given time on any given day the streets are full of cars, buses, people walking, people on bikes, and people running. Everyone is always in a rush. Most of the time people can be seen crossing the street while looking at their phone or while wearing headphones. I used to work in the city every day before having children and I was one of those people. Now when we go into the city it can be pretty obvious at times that we are not in fact New Yorkers. We know our way around but we forget sometimes how fast you have to move to keep up with the herd.

We had to take the subway uptown and when we got down onto the platform we were unsure if we were in the right place.  We tried looking for a map but couldn’t find one. Everyone around us was rushing around and it started to feel really chaotic. The last thing we wanted to do was get on the wrong train. All of a sudden out of nowhere a woman walked up to me and asked where we were trying to go. I told her and she smiled and said, “You are in the right place. This is your train. I am going to the same spot. You have five stops.” I couldn’t thank her enough. There we were out of our element and slightly panicked and this woman decided to approach me to help. She did this for no other reason than seeing someone who needed help and offering it. At that moment I smiled. It really made me happy. When we got onto the train I smiled at her and she smiled back. She knew how grateful I was. My oldest son smiled at her too. He knew that she had helped his mom and that made him happy.

When we got to our stop we made our way back up to the street and that’s when I realized I no longer had my cell phone. Did I drop it? Did I leave it at the museum when we were leaving? We stood at the top of the subway stairs while my husband called it and I dug frantically through my purse. It wasn’t there and I was really upset. It had the address of the place we were supposed to be arriving at next and it has so many pictures. I started to get really upset about all the pictures. It was almost 5pm so the streets were really busy. All of a sudden a man who was rushing to catch his train stopped and approached us. He asked if we were ok and if we needed any help. I quickly told him we were fine and thanked him for stopping. It had happened again. Another person had noticed we looked like we needed help and had stopped out of kindness. I stopped worrying about my phone and decided I would check at our next stop with the museum. Luckily it turned out to be there.

As we made our way into the movie theater my youngest son looked up at me with his innocent four year old eyes and said “Mommy people in New York sure are nice.” I realized he was right. Not just about people in New York. People for the most part are nice. We are so used to seeing and hearing the negative things that we forget that kindness is all around us. I realized that day that the best way for me to teach my boys about kindness is to show them kindness. I can talk to them until I’m blue in the face about them being kind, but it’s when they see us acting kind that they really understand it.  For the first time in a long time I was without my cell phone. It made me have to see people, really see them and it made me realize I want my boys to see me like that more often. I want them to see me being present. I want them to see me noticing things around us instead of the things in my phone. The man and woman who separately helped us that day had two things in common. They were present. Neither of them had their heads buried in a phone so they were really able to see us and they were kind.

Being kind is a quality but it’s also an action. In order for my children to grow up to be kind and do kind things I need to be present. I need to look at people. I need to be human. It’s when we take time to really see the people around us that we wind up being kind in our everyday lives. 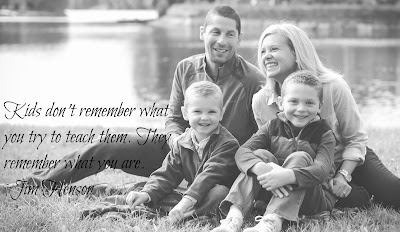 This post was also featured on The Today Parenting Team