I watched my first horror movie when I was in fourth grade. I was at a sleep over at my friend’s house and her parents made me call my parents for permission first. I remember my mom saying it was okay, but to remember it was just a movie and if it felt too scary just to turn it off. As I watched the plot unfold, I remember thinking, why do these people keep going back into the house, into a shed, or up a flight of stairs when it has repeatedly not worked for anyone else up to this point? The dark woods alone? No. DO NOT be an idiot.

I made it through the movie, albeit not without a couple of nightmares that week, but I was able to forget about it and sleep. I was able to sleep after telling myself over and over again that horror movies are not real. After all no one keeps doing the same dumb stuff over and over again, knowing that it will surely end the same way it did for all of their not so lucky horror movie friends that came before them. In real life when danger lurks we seek real safety. We go to the authorities. We head into a crowd and scream help. We don’t run into the dark woods alone even though we hear a chainsaw in the distance. Because that would be stupid. Obviously.

I don’t watch horror movies anymore. I’m more of a romantic comedy fan. There is quite enough horror movie material in this world without having to seek it out on the screen. Once I became a mom everything became a little scarier. I started to see the world in an entirely different light once my boys were born. That whole mama bear instinct people talk about is true. I would do anything to protect them. I would do anything to ensure their happiness and safety. Which has me begging the question, what if I can’t though? What if I can’t protect them? What if?

You see we are living in a real life horror movie here in America, and anyone who doesn’t think this is a problem isn’t paying attention. Seventeen lives were lost in Parkland Florida yesterday. Seventeen lives at a high school, another school shooting. We all bow our heads as the news flashes across the screen. We whisper, not again. We shout profanities. We feel angry. We feel heartbroken. We feel confused. We watch intently as all the information unfolds as if there is going to be some new revelation. It’s like that horror movie. It’s the same plot. It’s the same scenario. We know how it’s going to end, but we don’t seem willing to rewrite the script.

No one seems willing to talk about the hard stuff, and trust me we need to talk about it. We need to stop sending our thoughts and prayers as if they are magic. They are clearly not working. It is not enough. I keep seeing the same question all over social media, when will it be enough?  Every time I read that question I feel hopeless because it reminds me that the lives of twenty children between the ages of six and seven didn’t change anything. It reminds me that all we seem capable of in this country is fighting for “our side.” I have learned that gun owners really love their guns and while not all, most get completely defensive when the words gun reform are even uttered. Why? Why can’t there be a middle ground? Why can’t we have real discussions without everyone getting so angry with each other? We owe it to the families who are grieving. We owe it to our children because without them there is no future for our country.

I don’t claim to have the answers, but I am willing to have the hard discussions. I am willing to fight for what I believe is a start. I am willing to roll the rug up, watch the dust clear, and talk about what we have been continuously pushing underneath that rug for far too long. Yes we need to talk about gun reform and yes we need to talk about the mental health of our nation. No I am not saying that all guns need to be taken away from law abiding citizens, and no I am certainly not saying that all of those suffering from mental health issues are murderers. This is not about lumping everyone into one category. This is about coming together to rewrite the plot of this horror movie. This is about putting our own strong beliefs to the side long enough to hear one another. No solutions have ever come from a shouting match. It’s going to take listening, on both sides to really make a difference.

I am a mother and despite all the things I do on a daily basis, it is how I define myself. I know this because my two boys are the last thing I think about before I go to bed, and the first thing I think about when I wake up. I know this because the day I held them in my arms my priorities all changed. It is because of this that I cannot sit silently by as our country allows this epidemic to continue. We are the land of the free and the home of the brave, but right now it doesn’t feel that way. We aren’t free to feel safe in our own country, and up until now we haven’t been brave enough to do a single thing to change it.


As I write this I’m watching my boys sit at the dining room table. They are coloring. They are bickering and giggling together. I feel sad. I feel blessed. I feel scared, and I know many of you share in these emotions. I cannot even begin to wrap my head around the thought of sending them off to school and not having them return, but that is our reality in this country. We cannot think that it is impossible for it to happen to us because it has been proven time and time again that it is in fact possible. We need to rewrite this script. It’s time to stop running into the dark woods alone. It never ends well. We need to come together. We need to sit in the light and figure out a way to make this horror movie stop playing. We can rewrite the ending. We just have to be willing to change the script. 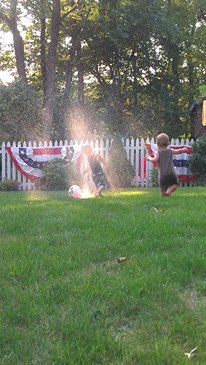 Posted by Jennifer Lizza at 8:46 PM