Can't We All Just Get Along?!

The other day I overheard a conversation between two women that went something like this: I heard the new Principal is a mom, of young kids.  My ears perked up a bit because my oldest is starting kindergarten in September. I am nervous and excited and of course eager to learn as much as I can about the school, the teachers and of course said new Principal. My first thought was oh good a principal with young kids will be great. She will understand our worries and concerns because she will be going through a lot of it at the same time. Apparently that was not the direction these two women were taking the discussion.


Instead what followed was this: “She must be super selfish. I’m sorry but my family comes first and there is no way with young kids that she should be taking on an administrative job like that. It takes up way too much time, something must be wrong with her.”  Hearing this literally stopped me in my tracks. I pretended to be gathering up some of my boys beach toys so that I could listen to more of what I refer to as utter nonsense. I won’t bore you with the details but I will tell you neither one of these women thought it was okay for another woman with young children to have accepted a Principal position of a school. I know what you’re thinking, but guess what these women are not stay at home moms. No, they are both working mothers and here they stood tearing down another woman for doing just that.


It left me scratching my head. I sat back in my chair and all I could think was I don’t get it. Here I am a SAHM and I am constantly thinking that it’s the working moms against the stay at home moms and vice versa at least that’s what the media has us all convinced.  Then it hit me.  It’s not the working moms vs. the stay at home moms it’s women.  It is women tearing down other women and I for one think it needs to stop. When I sat back down I looked around. I was looking for a flipping time machine.  I mean that would have explained it right? I had accidentally gotten into a time machine and traveled back to 1950. I looked and I looked but I couldn’t find one.


Even without the time machine the conversation struck a chord with me and brought me back in time to when I was pregnant with my oldest. I will never forget the words that came out of my boss’s mouth. When I say never I mean it has been five years since I left that company and there are still times I have nightmares about it. (Yes it was that bad).  I was working in corporate sales and when I went into the Vice President to tell him I was expecting I was met with these exact words: “Great. Well I guess this becomes OUR problem now. (Picture me sitting with my mouth wide open in complete and utter shock) He continued on to say: What I mean by that is raising a child is a woman’s job. We all know that. I mean your husband might say he is going to help but if your kid is sick YOU are going to be the one calling out and if your kid needs to be picked up early YOU will need to leave early. So you see it becomes our burden as well.” Oh well when you put it that way jackass it sounds much better! I left there that day knowing that I would NEVER come back there after having my child.


For the most part it’s still a man’s world out there and I think that we women are partly to blame for that. We need to have one another’s backs instead of talking behind them. We need to remember that we do not know everyone’s circumstances or why they make the decisions they do.  We need to remind ourselves that our decisions are our own and not just stick to them but be proud of them. Giving up a career to raise your children does not make you less than those who don’t and moving forward with a career after having children does not make you less than those who don’t.  There are those who don't have the choice. Going to work to pay bills and put food on the table should fill you with pride not guilt.


There are many things in life that I am unsure of but I can tell you with 100% certainty that if the new Principal was a young father the conversation between these two women would have went very differently.  No one would ever accuse him of being selfish or not wanting to spend time with his children. No one would ever say what was he thinking? Everyone would just assume that his wife had the house covered.  Worse than that everyone would talk about how ambitious he is and how great it is that he is finding his success.


We all deserve to reach our goals. We all deserve to have dreams. It doesn’t matter if your dreams consist of staying home with your children or heading out and having a huge career they are your dreams and no one should take them away, make you feel guilty about them or worse yet say you can’t have them.  As women we need to stand together and say enough of these “mommy wars” already.  I don’t know about the rest of you but I have enough wars going on with my 2yo (EAT YOUR BROCCOLI), my 5yo(PUT ON UNDERWEAR), my dog (STOP LICKING YOUR PRIVATES), and my own mommy guilt(MAN I SUCKED TODAY!) I certainly don’t need anyone else stepping in to help out. One thing I can tell you with certainty is that I am looking forward to meeting the new Principal. 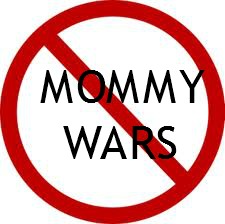