Learning To Pop The Bubble

As a child I remember thinking that by the time I became an adult things would be so different in the world. I imagined we would have flying cars and houses that appeared to be right out of an episode of The Jetsons. While we don’t have flying cars just yet we do have things that have made our lives easier. Can you say Keurig? We live in a world full of ever changing technology. We have smart phones, tablets, lap tops, streaming television, and Amazon. We live in an age where we don’t even have to leave the comfort of our own homes to get essentials like groceries, clothing, diapers, and any other thing you could possibly need. Our children couldn’t even begin to imagine a world where they would have to walk to the corner store to pick up the newspaper.  Isn’t that what the internet is for? Besides don’t even think about a walk to the corner store or someone will call child protective services.

The world sure has become easier. Or has it? As a parent I have been asking myself this question an awful lot lately. Do our kids in fact have it easier than we did? The answer I come up with time and time again is; in some aspects yes but in others not so much. There has been a lot of discussion lately on the internet, the news and amongst parents everywhere in our country about the way we parent today. I have to be completely honest. I don’t always know where I fall with my opinion on this.
I was born in the late 1970s so the majority of my childhood was spent hanging out in the 1980s. We didn’t have smart phones or tablets and what in the love is the internet? I am raising my kids in the same neighborhood I spent my childhood. I used to walk to school. We ALL used to walk to school. There were no sidewalks or crossing guards. We learned from an early age to walk together with our friends and look both ways. The children in our neighborhood no longer walk to school. It’s just not an option. All the kids have to take a school bus now even if that means they are only on the school bus for three minutes. They are not permitted to walk. It’s safer this way for the kids. Right?

The thing is I’m not sure anymore. When I was a child we played outside for hours without any adult supervision. My mom checked on us and gave us lunch while she was inside “getting things done.” We spent hours using our imaginations and making our own decisions. Albeit they were not always the best decisions, like that one time I pushed my sister into a bush only to realize it was a thorn bush, but they were our decisions and we learned from them. We rarely ran inside to our parents tattling on one another. We worked it out or fought it out. We came inside dirty, sometimes covered in thorns, took showers and repeated it all the next day. When my kids play outside it’s rare that one of us isn’t outside with them. My oldest is going to be seven and my youngest is turning four next month. There are times when I’m outside watching them and I feel ridiculous. We live in a safe neighborhood. All of the neighbors know one another. Our yard is fenced in and I can see them from the kitchen window but there I sit watching their every move.

I have vivid memories of being in first grade and walking a good three blocks to meet my best friend halfway so we could play at one another’s house. The thought of allowing my first grader to walk three blocks to meet a friend makes me shiver. Why? All the research shows that we are not living in a country that is any more dangerous than it was back then but as parents we have become much more protective. Is it because we know all of the dangerous things that do happen? We know about them in detail. We know them from real life crime shows. We know them from stories shared on social media. We know them.

Don’t get me wrong I’m not suggesting we birth our young and send them out into the wild on their own like a lion, but I am suggesting we think about how we are raising them and how it will affect them later in life. From a very early age I knew not to talk to strangers. My parents taught me about “scary vans” and what to do if someone should ask me to help them find their lost puppy. I was not a naïve child. I knew bad people existed and I knew when my sister and I were riding our bikes that we should run to the closest house and make it seem like we lived there should someone approach us. Scream. We knew always to scream. I talk to my kids about stranger danger but I’m not so sure that they would know how to apply that information should they actually need it. The problem with raising kids in a bubble is that when the bubble pops they are not going to know how to breathe the air.

We are living in an age of over scheduled kids who have every moment of their day planned out for them by other people. We held off from organized sports for a while, and by a while I mean until my oldest had already done half a year of Kindergarten. Somehow by today’s standards that is considered a lifetime. We allow him to do one sport per season now, and only if he says he wants to do it. We started to feel like the odd parents who were not running around from field to field on our weekends but now that we are doing it we are not so sure we care if we are the odd ones. When we were kids we did activities, but my parents dropped us off and picked us up an hour later. Practices can run two hours now and parents don’t just drop and go. No sir. You sit there and watch so that you know what to work on when you get home with little Johnny. It’s also just become the norm. It’s how we as parents spend our weekends and when we don’t have a full schedule we try to fill it with other stuff like playdates and trips to the zoo, a museum, a hike, a playground, or the Eiffel flipping tower. We think this makes us involved, good parents but I’m starting to think it is going to come back around and bite us right in our sports watching behinds.

Sure sports and other extracurricular activities teach children discipline and balance but what about teaching them how to navigate the world? If we are a generation of parents who spend every moment with our children, filling their memories with constant entertainment and activities all while navigating the unknown FOR them how can we expect them to go out into the great big world one day and survive without us? Forget the world how can we expect them to do something like head off to college or go out looking for their first job?

Sadly I think the answer is that a lot of them won’t be able to do it. Don’t misinterpret my concern that we are smothering a whole generation of kids with me not wanting to be involved. I do. I love my kids more than anything. I love watching them learn new things and having fun at a soccer game or a baseball game. I do, but sometimes I feel sad that they are missing out on a real childhood, the innocence of it all. The best parts of childhood are the unscheduled moments that happen. Those moments of digging in the dirt in the yard, or making a funny skit with a friend, or playing freeze tag until dusk on a summer night, these are the things I want so badly for my boys. I want them to walk a couple blocks to a friend’s house and feel a sense of security and freedom all at once. I want them to discover that they are able to navigate things without our help all of the time. 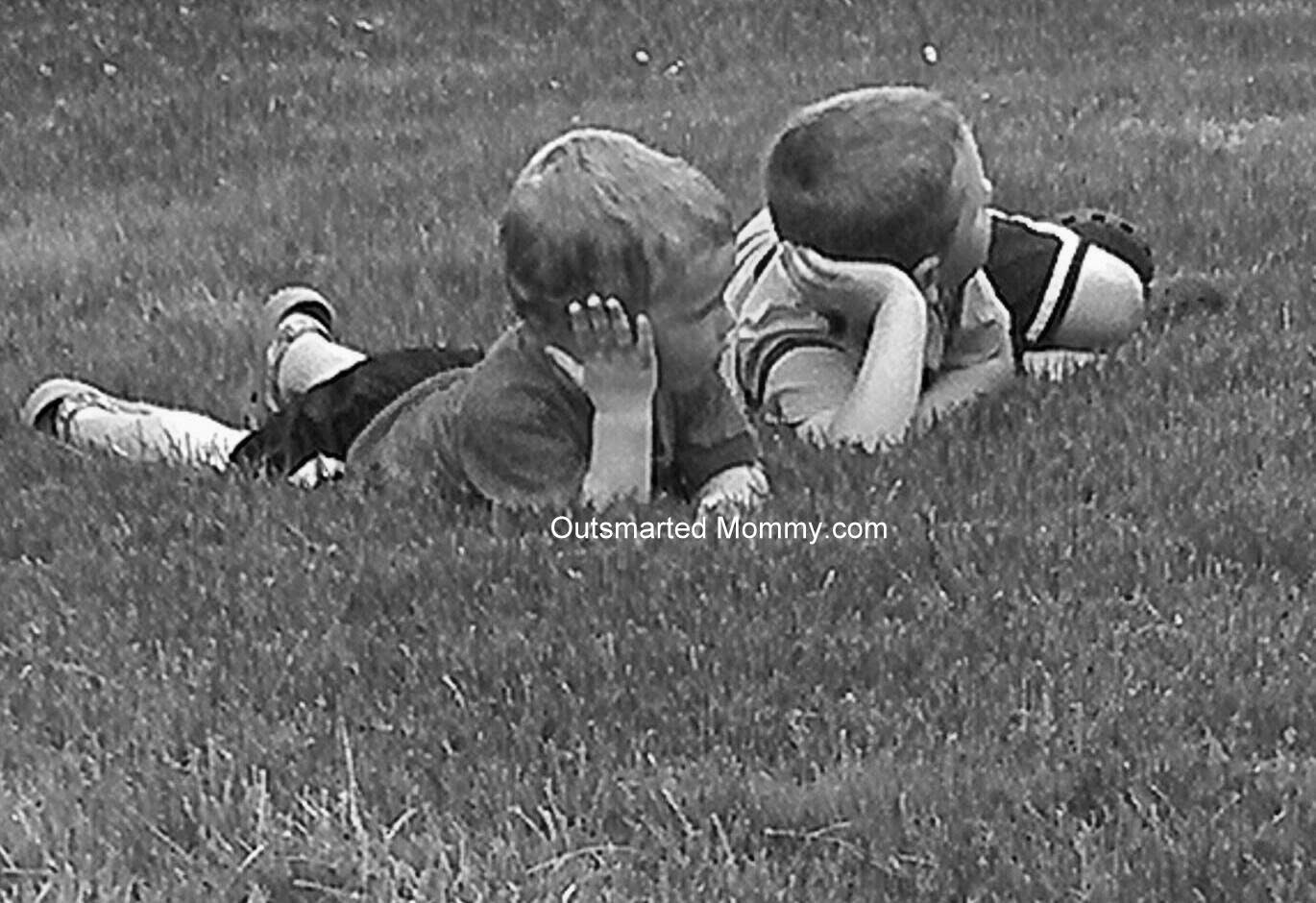 I want them to make a bad decision once in a while so that they know when they make a good one. I want them to find a frog in a stream, ride bikes and stay out long enough to hear the crickets calling them home. I’m starting to realize that I need to pop the bubble and allow my children to walk out in the big wide world without me. I will most likely be hiding behind a tree watching them for the first few times but I know in my gut that allowing them to discover a little bit of the world around them will help them when they eventually go out into it all on their own one day. It turns out that my hopes for the future have turned into a longing for the past. 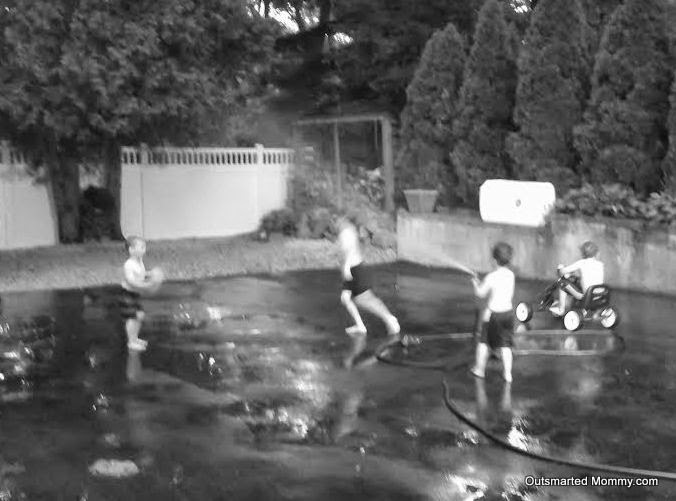 Posted by Jennifer Lizza at 6:11 PM