Yesterday I went grocery shopping to prepare for the snow storm because kids eat A LOT. I bought all the ingredients for things to cook on our day off. I was happily driving home thinking about homemade French toast for breakfast, roasted butternut squash soup, pulled chicken sandwiches and a nice glass of wine.
I started looking forward to sledding with the boys and I was excited that my husband promised to take the day off. As I drove home listening to the radio, I had no clue what was about to happen. I was blissfully unaware that in a mere three minutes time all those thoughts would be replaced by the sounds of sirens, the smell of smoke, and a feeling of panic and confusion. Another driver ran a stop sign on the side street I happened to be driving directly in front of at that exact moment. It was as if my car was completely invisible to him. I don’t know why. I have no clue what distracted him, but what I do know is that his moment of distraction, caused him to barrel full speed into the driver’s side of my vehicle.

Just like that my day was completely altered. It all happened so fast. When I looked up I could see people running towards me. I could see their mouths shouting words, but I couldn’t hear what those words were. My ears were ringing from the impact and the smell from the airbags was overwhelming. As I started to grasp what just happened I immediately started to cry. A woman started banging on my window telling me to put my windows down because my car was full of smoke. Another woman shouted to turn the car off because the street was full of fluid. I had not even put the car in park yet. I felt like everything before happened in an instant, but somehow everything after was happening painfully slow.

I put my passenger side window down and a woman with a calming voice told me they had called 911 and they were going to stay with me. She asked me if I was able to unlock the vehicle and I did. She opened the door and took my hand. She introduced herself. “My name is Marge. I saw the whole thing. I’m going to stay with you. I’m so sorry this happened. We are going to take care of you. Was anyone else in the car?” I nodded my head no still unable to speak through my tears. “How old are your kids?”
“They are nine and six. Am I bleeding?” “No honey not that I can see but your hand looks hurt and your face looks swollen from the impact. The police are on their way.” I could hear the sirens in the distance. Within minutes several police cars and two ambulances were on the scene. The police took my information and assured me they would take care of me. They told me my car was going to be towed and that the tow truck was on its way. I saw them speaking with witnesses one after the other. As I sat there in my car watching all of the activity around me, I remembered I had a trunk full of groceries. Groceries are flipping expensive. I was not about to have these groceries towed. I quickly called my friend, Melissa who lives right there. She didn’t even hesitate and probably had a hard time understanding me through my blubbering, but I heard her say I will be right there.

Then one of the police officers asked if I wanted him to call my husband. I imagined my husband on the other end of the phone hearing that I was in an accident from an officer and I asked if I could call instead. He said of course. I tried to remain calm as to not scare him, but as soon as I heard his voice my calmness changed to tears yet again. I imagine there are a bunch of police officers today who have nick named me the lady of many tears. It’s fitting. Trust me.

My husband immediately asked where I was and said he was leaving work. Then two paramedics came to bring me into the ambulance to check all my vitals. Blood pressure? High. Heart beat? Rapid. Tears? Tons. They asked all the questions about dizziness and nausea. No to the dizziness. Yes to the nausea. Can you dehydrate from crying too much? I think you can. I told them my nose felt swollen. They replied that my nose looked great, but to keep in mind I was smacked in the face by an air bag and while that impact is better than a dashboard it can still cause swelling and bruising. I told them both my hands were hurting and they told me they were both bruised and my left hand had suffered burns from the airbag. It was blistered and red.  I told them I had never been in an ambulance before and that I talk a lot when I’m nervous. They laughed and then the guy who was checking my blood pressure said, “I think your friend is here for your groceries.” “How do you know?” “Well she looks upset and she has the same hat as you. She’s not in a uniform so I’m going to go out on a limb and say it’s your friend.”

Sure enough there she was loading all of my groceries into her car with the help of one of the officers. She has no idea, but seeing her made me so happy at that moment, a familiar face, my friend, someone who would cry with me so I didn’t look like the only cry baby on the scene. The officer who took the report was so kind. He joked when I needed it and consoled me when I needed that instead. I have no idea if I’ll ever see Marge again, but I hope she knows how much she helped yesterday. In fact I can still see all of the faces of the people who ran towards me eager to help. They all took the time to stop and wait for the police. They all took the time to care for a stranger. I promise to pay that forward because I never realized how important those people are during the initial stages of an accident like that.

I spent the better part of the day at the hospital getting x-rays. They treated my burn and wrapped my hand. They told me to see my doctor about the burn within two to three days.  We left the hospital and headed to the tow yard to gather any personal belongings from my car that the police may have missed. When I saw the damage I realized just how lucky I was. 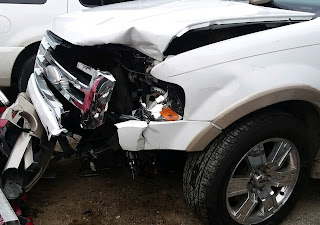 We left there, got a rental car for me, and headed to my parents to pick up the boys. I have never wanted to hug them more than I did yesterday. We arrived home and friends and family started texting and calling to check on me.

There was a knock on my door and there stood my friend Trish with a full dinner for my family. I could have cried, but I’m fairly certain my tear ducts were like, listen lady we are all out of tears. Pull yourself together. So instead I hugged her and thanked her because honestly despite the fact that I now had a house full of groceries, having a homemade meal that I didn’t have to prepare was one of the best gifts.


I went to bed last night shaken up, but feeling ever so blessed. It could have been so much worse. Life can change in a blink. I started off my morning joking about the prediction of another snow day, and I ended it so happy to know that when I woke up in the morning the people who mean the most to me would be home with me all day. I have no idea why my path crossed with the other driver when it did, but I do know why my path has crossed with all the people I choose to have in my life. They show up. Every single one of them shows up and I would do the same for them. Cars can be replaced. People cannot. 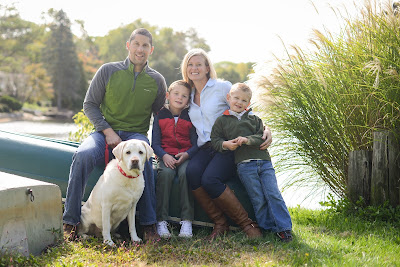 *Distracted driving is the cause of most motor vehicle accidents. The text, the phone call, the radio station can all wait. It can be the difference between life and death. It can wait.*

Posted by Jennifer Lizza at 6:10 PM