Warning: Assholes Can Be Found At The Playground

The park.  The playground. Call it what you want but it’s pretty much the place to be when you’re a parent. The kids get to run around, climb like monkeys on things other than your couch and get out all the sugar from the fruit snacks and “healthy” granola bars they begged for while you got ready.  The moment you let them out of the car you can sense their excitement and they can sense you relaxing.  My kids are still very young so I am not able to sit and read on a bench while my children play. Hell to the no. My two year old would wind up 3 towns over before I could even get through 10 pages of a magazine.


So that being said the park is relaxing for me because my kids have freedom and space to run around. It is 2 hours of knowing they will not be pulling the dog’s tail or punching each other over some stupid book (okay book and stupid should not be paired together but you know what I am talking about here). When we are home the boys will fight about every little thing but once we are out at a park they are suddenly best friends. It’s like two lions that were held captive being released into the wild. *I can actually hear the music from the Lion King as they run*.


There isn’t much that can ruin a day at the park. Okay there are a couple of things that can ruin a day at the park and they are forgetting to bring lunch and or snacks (I mean kids eat like pigs and if you forgot food you might as well just turn around and go home), a massive storm moving in (if it’s not lightening well then I am all for letting them run in the rain *Cue the Lion King music*) and the asshole parent. Oh you know who I mean because EVERY park/playground has one.  I have developed the ability in the past five years to be able to pick said parent out of the crowd within the first five minutes of being there. I spend the next two hours herding my children like sheep in any direction that will move them away from him or her.  I love to share so I figure you all deserve to know how to spot the asshole parent at the park. Here are the top ten signs that you have in fact found them.


1.      They are on their phone. No, no that in and of itself doesn’t make them an asshole. It’s when their adorable little kid Johnny ass kicker has hit at least 12 children and they are still on their phone yes that does it.


2.      They are talking loud enough for every parent at the playground to hear about their awesome vacation to an Island off of Mars. “Oh no it’s VERY exclusive”.


3.      They are dressed as if they are hoping to be discovered by the top model scout for Vogue’s Fall Fashion issue. I have news for you. YOU LOOK LIKE AN IDIOT! Sure I am here just happy I remembered to put on a bra but watching you run after Sally Sassy pants in your spiked Manolo Blahnik’s will be a week’s worth of entertainment. I will replay this in my brain over and over again thank you very much.


4.      They are at the park with 1-3 nannies and they talk to said nannies like they are the gum on the bottom of their Manolo Blahnik’s.


5.      They repeatedly stand at least 20ft away from Johnny Ass kicker and expect him to listen when they say “No, no, no honey don’t do that” in the most annoying voice possible. Your kid is 4 YEARS old not 4 months.


6.      Their children are dressed like an ad out of the latest J. Crew catalog. Listen I like to dress my kids cute…for holidays, but when they are at the park do they really need to be in a pair of khaki’s, a polo with a sweater vest and a tweed jacket, dress shoes and a beret. That shit can’t be comfortable to play in and every other kid is looking at your kid like they are weird.  To top it off they shout "No don't get your shoes dirty honey. Mommy just bought those." Poor kid. I want to show him the closest mud puddle and let him have at it!


7.      They are talking about all the famous people they know. “Oh my mother is actually friends with so and so’s mother’s dog walker and we always get invited to parties at their house” No one is impressed, not even the dogs.


8.      When their child asks them to push them on the swing they respond: “Not now honey mommy is on Twitter” I don’t think I need to say this out loud but that poor kid will be tweeting about you one day and it won’t be pretty.


9.      They force laugh REALLY LOUD. Oh you know what I am talking about. Everything is funny to them. I could have just told this person that my dog died and they would laugh super loud to get the attention of every single person at the park.


10.  They tell Johnny Ass Kicker that it’s okay if he doesn’t want to take turns on the swing. “Just don’t get off honey that little boy will just have to wait for 18 hours.”


There you have it. The top ten signs you may be way too close to the asshole at the park. If you recognize any of these run the other way. Heck print this list out and bring it with you. Reference it if you need to. Share it so others are not subjected to this torture.  If any of these signs sound like you well I am sorry to say YOU may be the asshole at the park so then take this as a lesson.  Put your Manolo's away. Let your kid wear ripped jeans and get dirty. Play with him. You won't regret it. I promise you. 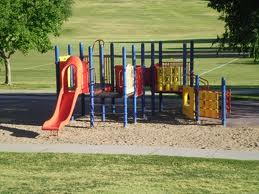